iSOG Is Aligned With Reputable and Professional Hockey Individuals & Organizations! 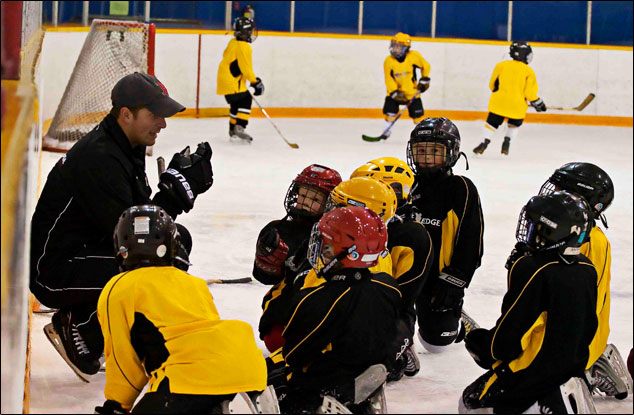 Hockey Development at all levels

Every second in Canada a pair of hockey skates are being laced up. We want to give every player a reason to lace them up again tomorrow. Our coaching team wants every player to leave the ice with a smile on their face. Through the game of hockey we want to provide each individual player with a healthy, socially interactive, fun and rewarding experience. For the past 10 years Inside Edge Hockey Training has been providing hockey players with the greatest experience possible. “Giving you an EDGE up on life” is what we strive on offering everyday. Inside Edge hockey will fit into your families life. We provide a safe environment, work on creating friendships, enable individual growth, and most importantly give players a reason to come back to the rink. That is what “Giving you an Edge” is all about. Our coaching team are role models, teachers, leaders, and friends. We are always fair, encouraging and committed to you. Inside Edge is always growing and attaining more knowledge in and around the game of hockey. That is how you have an “EDGE” up on everyone. Inside Edge. Your hockey family, at any level of the game.

Steve McKichan created Future Pro Goalie School in 1992 after his NHL goaltending career was cut short because of injury. He had just finished his teaching degree and loved teaching the position. Steve had actually made it to the NHL, in part, because of his ability to be a student of the game. He learned the position from great goalie coaches like Mitch Korn and Ted Ouimet and knew he could really impact young athletes in a positive way as his mentors had done with me. He also knew that coaching young goalies would keep him in the game and ease his transition from being a pampered NHL athlete to a normal citizen. 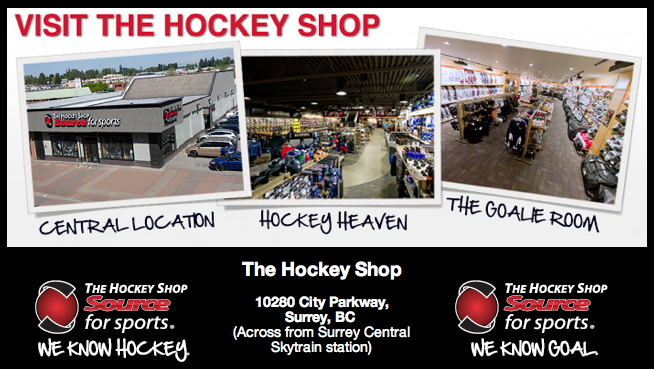 The Hockey Shop is a family owned and operated hockey superstore that is located in Surrey, British Columbia. Rod and Ursula Bolivar opened the doors to the original store with their son Chad in 1988, and have never looked back. At the time it was a humble mom-and-pop store that also featured the family dog, a yellow Labrador named Goldie. An entirely new store, three different yellow labs, and a string of renovations preceded the arrival of Ken Whiddington, his son Brad, and daughter Kristie, who partnered up in 2001 and helped bring The Hockey Shop to the next level of service and selection. March 2011 saw the shop move to a brand new 17,000 square foot retail location, securing it’s place as the largest independent hockey retailer on the West Coast of Canada. With a staff of over twenty-five hockey specialists, including eight goal specialists and four professional skate sharpeners: We Know Hockey. The new location features some exciting new developments for The Hockey Shop, including a Stick Demo Zone, complete with synthetic ice, as well as one of the largest goaltending equipment sections in the world.Our online store, thehockeyshop.com, has been in operation since 1996 and proudly supplies hockey equipment to every continent on the planet. We shop the world to provide our customers with the finest selection of gear available. No stone is left unturned as our equipment experts’ look for the best value and fit for each model and piece of gear we purchase. Only the best make the grade and end up on our shelves. 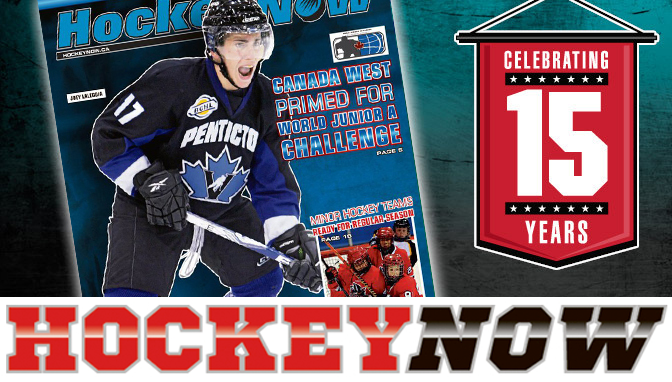 Canada’s hockey stories: from grassroots to Junior to NHL

Hockey Now is celebrating 15 years of telling Canada’s hockey stories: from grassroots to Junior, from the local rink to the national stage, from next weekend’s tournament to next year’s NHL stars. We highlight the amazing kids in our communities through programs like Hockey Now Minor Hockey Player of the Year and Hockey Now Parade of Champions. And we tell the stories that no one else does and we cover a massive spectrum of hockey that you can’t find anywhere else. It’s all about you: your league, your team, your name, and your face—in print and online.

Where to find us.
Hockey Now produces three regional editions that are distributed in newspaper racks in more than 800 arenas and 300 retailers across Canada. If you’re in B.C., Alberta, or Ontario, odds are, you’ll be able to find one of our 807,000 annual copies at your nearest rink. And like any good print publication these days, we pay just as much attention to our website, where we post fresh content daily. And, of course, we are in a 24/7 conversation with the hockey world through our Facebook and Twitter pages.
Hockey Now Media Kit.

CKM Sports Management Ltd is a sports management firm that acts as a resource for amateur, and professional Hockey players with recruitment and development services to reach the next level of competition. “As your development coach I am a member of the team acting on your behalf developing and contacting people, teams and resources that provide you with opportunities to compete at the next level.” Through increasing competitive advantage we focus on improving skills relating to life planning, psychological strength, education, and athletic ability. We allow our clients to focus on their game while we establish a smooth transition to a higher level of competition. Our focus is on all aspects of a player ’s life that can increase their competitive advantage. The leadership and support CKM provides significantly increases the direction and focus of each player, while moving forward towards their ultimate goal. CKM specializes in working with Bantam, Midget, and Junior age hockey players.

The next generation in goaltending development

The area’s top pro, college, junior, high school, prep and youth hockey goalies choose Mike Buckley for the proven success of his systematic approach to goaltending. Mike’s system fits into all players games, at all levels. It is a thoroughly mapped out set of principles and variables that is utilized as the groundwork of the goaltenders game. The system builds on the six core fundamentals of goaltending; skating, stance, positioning, save selection, rebound control and recovery. Mike has a system for each, properly developing goaltenders, while allowing goalies to develop their own style based on their strengths, creating quick efficient movements and confidence in their game. This trendsetting approach to training goalies is quickly changing the way goaltenders are taught. Mike is the first to implement this system making him a pioneer in the position. Mike has more than 10 years of goalie coaching experience. His year-round private and summer students include Brian Foster, Mike Spillane, Dan Rosen, Dan Ellis (Tampa Bay Lightning), Mike Morrison (Bridgeport Tigers/New York Islanders), Jeff Pietrasiak (Texas Wildcatters), Alex Westlund, Jean-Marc Pelletier, Andy Chiodo, Chanda Gunn and college goaltenders from BC, UNH, UMass, Vermont, Merrimack, Brown, Northeastern, Quinipiac, UConn, Cornell, UMaine, Salem State, Southern New Hampshire, St. Anselm’s and more. In addition to being president of GDS, Inc. Mike is also the goaltending coach for the University of Massachusetts-Amherst, and director of goaltending for Pro Ambitions Hockey, where his curriculum is taught across the country at more than 120 locations. GDS also provides goaltending consulting to sports management groups, NHL scouts, top Prep schools, Jr. teams and youth hockey organizations including Assabett Valley Girls, NH Avalanche, New England Moose, Salem Youth Hockey, Masco Youth Hockey, Nashua Panther Selects and many more. Through GDS, Mike also helps several top equipment manufacturers develop goaltending equipment.

The Express entered the British Columbia Hockey League in 2001 under an ownership group of hockey enthusiasts and led by Vancouver Canuck Alumni Darcy Rota. The first four years in Coquitlam the team produced many players who moved on to NCAA Scholarships and later the NHL including Milan Lucic (Boston Bruins), David Jones (Colorado Avalanche), Brandon Yip (Colorado Avalanche) and Andrew Ladd (Chicago Blackhawks.)

For the 2005/2006 season the Express moved to Burnaby where they won the RBC National Championship. After this season Kyle Turris was drafted 1st round, 3rd overall to the Phoenix Coyotes. To this date, Kyle Turris is the highest drafted Junior A Hockey player in history.

The Express are pleased to be back home in Coquitlam playing out of the newly renovated Poirier Sports & Leisure Complex. Goalie coaching staff fully utilize the iSOG product for high level development and team analytics. 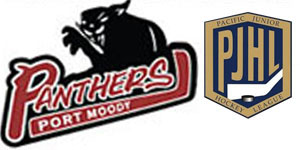 The Port Moody Panthers finishing just their first season under new ownership will have their work boots on this off season. Knowing that preparation is everything in order to begin a successful winning culture, the Panthers are excited about the introduction of iSOG into the program. Part of understanding where you fit as a hockey player, and knowing what to prioritize in your development is seeing your own un-subjective data